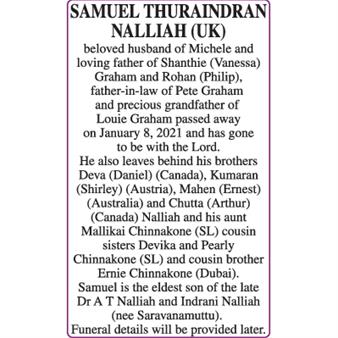 Light a Candle
Originally printed on January 14, 2021 in the Herts Advertiser Series.
Viewed by 98 Visitors.

SAMUEL THURAINDRAN NALLIAH (UK) beloved husband of Michele and loving father of Shanthie (Vanessa) Graham and Rohan (Philip), father-in-law of Pete Graham and precious grandfather of Louie Graham passed away on January 8, 2021 and has gone to be with the Lord. He also leaves behind his brothers Deva (Daniel) (Canada), Kumaran (Shirley) (Austria), Mahen (Ernest) (Australia) and Chutta (Arthur) (Canada) Nalliah and his aunt Mallikai Chinnakone (SL) cousin sisters Devika and Pearly Chinnakone (SL) and cousin brother Ernie Chinnakone (Dubai). Samuel is the eldest son of the late Dr A T Nalliah and Indrani Nalliah (nee Saravanamuttu). Funeral details will be provided later.