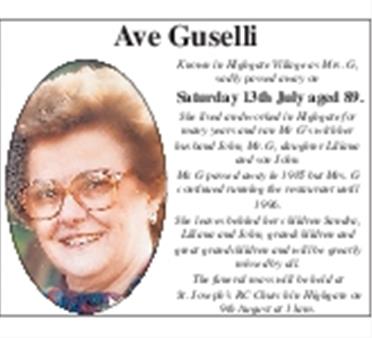 Light a Candle
Originally printed on August 1, 2019 in the Broadway Ham & High.
Viewed by 165 Visitors.

Known in Highgate Village as Mrs. G, sadly passed away on Saturday 13th July aged 89. She lived and worked in Highgate for many years and ran Mr G’s with her husband John, Mr. G, daughter Liliana and son John. Mr. G passed away in 1985 but Mrs. G continued running the restaurant until1996. She leaves behind her children Sandra, Liliana and John, grandchildren and great grandchildren and will be greatly missed by all. The funeral mass will be held at St. Joseph’s RC Church in Highgate on 9th August at 11am.