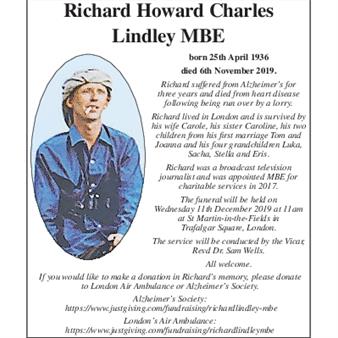 Light a Candle
Originally printed on December 5, 2019 in the Broadway Ham & High.
Viewed by 125 Visitors.

Richard Howard Charles Lindley MBE born 25th April 1936 died 6th November 2019. Richard suffered from Alzheimer’s for three years and died from heart disease following being run over by a lorry. Richard lived in London and is survived by his wife Carole, his sister Caroline, his two children from his first marriage Tom and Joanna and his four grandchildren Luka, Sacha, Stella and Eris. Richard was a broadcast television journalist and was appointed MBE for charitable services in 2017. The funeral will be held on Wednesday 11th December 2019 at 11am at St Martin-in-the-Fields in Trafalgar Square, London. The service will be conducted by the Vicar, Revd Dr. Sam Wells. All welcome. If you would like to make a donation in Richard’s memory, please donate to London Air Ambulance or Alzheimer’s Society. Alzheimer's Society: https://www.justgiving.com/fundraising/richardlindley-mbe London's Air Ambulance: https://www.justgiving.com/fundraising/richardlindleymbe