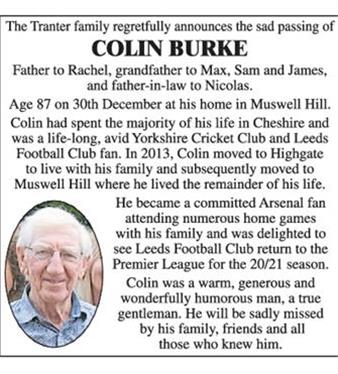 Light a Candle
Originally printed on January 21, 2021 in the Broadway Ham & High.
Viewed by 73 Visitors.

The Tranter family regretfully announces the sad passing of Colin Burke, father to Rachel, grandfather to Max, Sam and James, and father-in-law to Nicolas. Age 87 on 30th December at his home in Muswell Hill. Colin had spent the majority of his life in Cheshire and was a life-long, avid Yorkshire Cricket Club and Leeds Football Club fan. In 2013, Colin moved to Highgate to live with his family and subsequently moved to Muswell Hill where he lived the remainder of his life. He became a committed Arsenal fan attending numerous home games with his family and was delighted to see Leeds Football Club return to the Premier League for the 20/21 season. Colin was a warm, generous and wonderfully humorous man, a true gentleman. He will be sadly missed by his family, friends and all those who knew him.