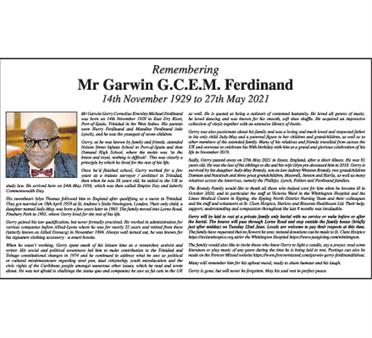 Light a Candle
Originally printed on June 17, 2021 in the Broadway Ham & High.
Viewed by 37 Visitors.

Obituary: Mr Garwin G.C.E.M. Ferdinand 14th November 1929 to 27th May 2021 Mr Garwin Gerry Cornelius Eversley Michael Ferdinand was born on 14th November 1929 in East Dry River, Port-of-Spain, Trinidad in the West Indies. His parents were Harry Ferdinand and Mandine Ferdinand (née Lynch), and he was the youngest of seven children. Gerry, as he was known by family and friends, attended Nelson Street Infants School in Port-of-Spain and then Osmand High School, where the motto was “to the brave and loyal, nothing is difficult”. This was clearly a principle by which he lived for the rest of his life. Once he’d finished school, Gerry worked for a few years as a trainee surveyor / architect in Trinidad, then when he was 26 years old, he sailed to the UK to study law. He arrived here on 24th May 1956, which was then called Empire Day and latterly Commonwealth Day. His sweetheart Islyn Thomas followed him to England after qualifying as a nurse in Trinidad. They got married on 18th April 1959 at St, Andrew's Stoke Newington, London. Their only child, a daughter named Judy-May, was born a few years later in 1963.The family moved into Lorne Road, Finsbury Park in 1965, where Gerry lived for the rest of his life. Gerry gained his law qualification, but never formally practised. He worked in administration for various companies before Allied-Lyons where he was for nearly 22 years and retired from there (latterly known as Allied Domecq) in November 1994. Always well turned out, he was known for his signature clothing accessory – a smart bowtie. When he wasn’t working, Gerry spent much of his leisure time as a researcher, activist and writer. His social and political awareness led him to make contribution to the Trinidad and Tobago constitutional changes in 1974 and he continued to address what he saw as political or cultural misdemeanours regarding steel pan, dual citizenship, youth miseducation and the civic rights of the Caribbean people amongst numerous other issues, which he read and wrote about. He was not afraid to challenge the status quo and companies he saw as fat cats in the UK as well. He is quoted as being “a stalwart of contented humanity”. He loved all genres of music, he loved dancing and was known for his smooth, soft shoe shuffle. He acquired an impressive collection of vinyls together with an extensive library of books. Gerry was also passionate about his family and was a loving and much loved and respected father to his only child Judy-May and a paternal figure to her children and grandchildren, as well as to other members of the extended family. Many of his relatives and friends travelled from across the UK and overseas to celebrate his 90th birthday with him at a grand and glorious celebration of his life in November 2019. Sadly, Gerry passed away on 27th May 2021 in Essex, England, after a short illness. He was 91 years old. He was the last of his siblings to die and his wife Islyn pre-deceased him in 2010. Gerry is survived by his daughter Judy-May Brandy, son-in-law Aubrey Winston Brandy, two grandchildren Damian and Nataleah and three great grandchildren, Maxwell, Jenson and Harlie, as well as many relatives across the Americas, namely the Phillips, Lynch, Fabien and Ferdinand families. The Brandy Family would like to thank all those who helped care for him when he became ill in October 2020, and in particular the staff at Victoria Ward in the Whittington Hospital and the Limes Medical Centre in Epping, the Epping North District Nursing Team and their colleagues and the staff and volunteers at St. Clare Hospice, Harlow and Blossom Healthcare Ltd. Their help, support, understanding and compassion throughout the last 8 months was invaluable. Gerry will be laid to rest at a private family only burial with no service or wake before or after the burial. The hearse will pass through Lorne Road and stop outside the family house (briefly just after midday) on Tuesday 22nd June. Locals are welcome to pay their respects at this time. The family have requested that no flowers be sent; instead donations can be made to St. Clare Hospice https://stclarehospice.org.uk/or the Whittington Hospital https://www.justgiving.com/whittington. The family would also like to invite those who knew Gerry to light a candle, say a prayer, read some literature or play music of any genre during the time he is being laid to rest. Postings can also be made on the Forever Missed website https://www.forevermissed.com/garwin-gerry-ferdinand/about. Many will remember him for his upbeat mood, ready to share humour and his laugh. Gerry is gone, but will never be forgotten. May his soul rest in perfect peace.