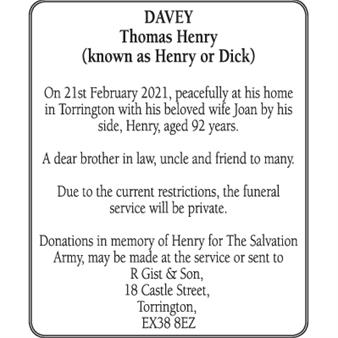 Light a Candle
Originally printed on February 24, 2021 in the North Devon Gazette.
Viewed by 34 Visitors.

DAVEY Thomas Henry (known as Henry or Dick) On 21st February 2021, peacefully at his home in Torrington with his beloved wife Joan by his side, Henry, aged 92 years. A dear brother in law, uncle and friend to many. Due to the current restrictions, the funeral service will be private. Donations in memory of Henry for The Salvation Army, may be made at the service or sent to R Gist & Son, 18 Castle Street, Torrington, EX38 8EZ