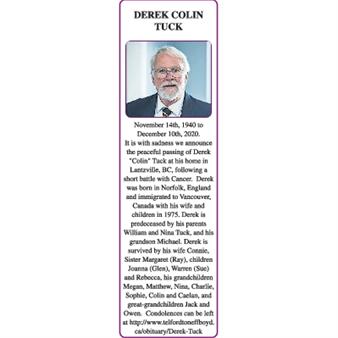 Light a Candle
Originally printed on January 8, 2021 in the North Norfolk News.
Viewed by 35 Visitors.

DEREK COLIN TUCK November 14th, 1940 to December 10th, 2020. It is with sadness we announce the peaceful passing of Derek “Colin" Tuck at his home in Lantzville, BC, following a short battle with Cancer. Derek was born in Norfolk, England and immigrated to Vancouver, Canada with his wife and children in 1975. Derek is predeceased by his parents William and Nina Tuck, and his grandson Michael. Derek is survived by his wife Connie, Sister Margaret (Ray), children Joanna (Glen), Warren (Sue) and Rebecca, his grandchildren Megan, Matthew, Nina, Charlie, Sophie, Colin and Caelan, and great-grandchildren Jack and Owen. Condolences can be left at http://www.telfordtoneffboyd.ca/obituary/Derek-Tuck