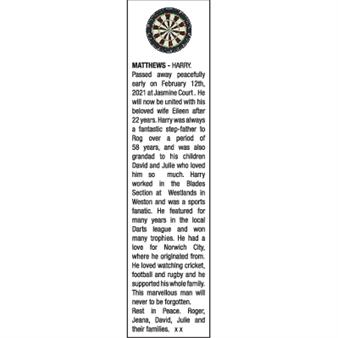 Light a Candle
Originally printed on February 18, 2021 in the Weston Worle Somerset Mercury.
Viewed by 42 Visitors.

MATTHEWS HARRY. Passed away peacefully early on February 12th, 2021 at Jasmine Court . He will now be united with his beloved wife Eileen after 22 years. Harry was always a fantastic step-father to Rog over a period of 58 years, and was also grandad to his children David and Julie who loved him so much. Harry worked in the Blades Section at Westlands in Weston and was a sports fanatic. He featured for many years in the local Darts league and won many trophies He had a love for Norwich City , where he originated from. He loved watching cricket, football and rugby and he supported his whole family This marvellous man will never to be forgotten. Rest in Peace. Roger, Jeana, David, Julie and their families. x x